A wall painting, dating back over 4,300 years, has been discovered in a tomb located just east of the Great Pyramid of Giza.

The painting shows vivid scenes of life, including boats sailing south on the Nile River, a bird hunting trip in a marsh and a man named Perseneb who's shown with his wife and dog. 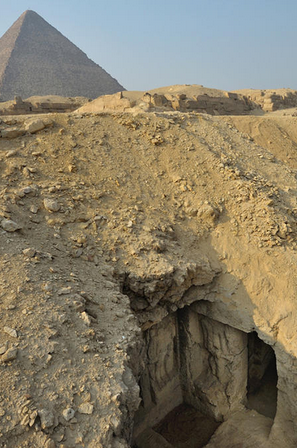 While Giza is famous for its pyramids, the site also contains fields of tombs that sprawl to the east and west of the Great Pyramid. These tombs were created for private individuals who held varying degrees of rank and power during the Old Kingdom (2649-2150 B.C.), the age when the Giza pyramids were built. [See Images of the Painting and Giza Tomb]

The new painting was discovered in 2012 by a team from the Institute of Oriental Studies of the Russian Academy of Sciences, which has been excavating these tombs since 1996.

A surprise discovery - Scientists discovered the painting when they began restoring the tomb of Perseneb, a man who was a "priest" and "steward," according to the tomb's inscriptions.

View galleryAncient Priest&#39;s Tomb Painting Discovered Near&nbsp;&hellip;
The ancient tomb, possibly for a priest, contains a central room (shown here), with four statues.
His tomb, located 1,000 feet (300 meters) east of the Great Pyramid of Giza, contains an offering room, central room and burial chamber. The three rooms contain 11 statues showing depictions of Perseneb and members of his family. First recorded in the 19th century by the German explorer Karl Richard Lepsius and French Egyptologist Auguste Mariette, the tomb is believed to date to the middle or late fifth dynasty (ca. 2450-2350 B.C.). The fifth dynasty is a time period within the Old Kingdom.

"Known since the 19th century, the [tomb] could hardly present any new principal features. Therefore, it was a real surprise to discover an Old Kingdom painting on the eastern wall of the central room," wrote Maksim Lebedev, a reader (the American equivalent is a professor) at the Russian State University for the Humanities, in an email to Live Science.

"The painting was made on a thin layer of fine white plaster darkened with 19th-century soot and dirt. By the time of recording, only about 30 percent of the original plaster had preserved on the wall," Lebedev said.

Since the 19th century, the growth and industrialization of Cairo has led to problems with pollution at Giza. And the fact that people were actually living inside the tomb in some periods (including the Middle Ages) also damaged the painting, Lebedev said.

Nevertheless, "none of the scenes has been lost completely. The remaining traces allow [for the] reconstruction [of] the whole composition," Lebedev said.

The reconstructed painting reflects ancient life. At the top of the painting there are images of boats sailing the Nile River, their sails pointing south. They "probably represent the return of the owner from the north after a pilgrimage or inspection of his funerary estates," Lebedev said. Funerary estates were tax-exempt property left by the deceased to help support surviving dependents and the upkeep of his tomb. [Photos: Amazing Discoveries at Egypt's Giza Pyramids]

The painting also shows an image of Perseneb, his wife and what appears to be his dog. There is also a marsh scene with a man on a boat who appears to be bird hunting.

"All the depicted scenes had important symbolic meanings. Fowling (bird hunting) in the marshland could refer to the ideas of rebirth and taming of chaotic forces," Lebedev said. "The full agricultural sequence relating to crops represents the most crucial event in the life of ancient Egyptian society," he added. Also, the representation of "boats with sails going southwards is another important tomb subject, which reflected the high status of the person."

More discoveries to come - The area the Russian team has been excavating contains a number of tombs that may hold undiscovered wall paintings. The team has found indirect evidence for paintings in some tombs, such as very smooth walls and remains of wall plaster and paint, Lebedev said.

"Since many rock-cut chapels of the eastern edge of the Giza plateau were rapidly excavated or just recorded [without excavation] in the first half of the 20th century, sometimes without sufficient documentation, and still covered with thick layers of rough plaster left from later inhabitants [who lived in the tombs], one may expect that more paintings will be discovered in this part of the necropolis."

The tomb of Perseneb was partly restored by the Russian mission in 2013. The work was supported by a donation from the Thames Valley Ancient Egyptian Society in the United Kingdom.

The painting reconstructions will be published, in full, in a scholarly publication in the future. The images on Live Science show just a few of the reconstructed scenes.

Power Strip - Strips Your Pain Away
Norwegians Thought Aliens Had Taken A Fancy To Their Country Back In The 1950s
The kayak trip of a lifetime
Your Face Can Determine How Long You Will Live
Massive Earthquake 8.0 Shakes Aleutian Islands - Alaska
Mapping Earth's Magnetic Field - Space Mission
Phoenix Az Preserves History Old buildings