Dinosaurs and The Children - Learning Fun

Dinosaurs and The Children - Learning Fun

If you ever want to make your kids frantically excited, just tell them this: The Children’s Museum in San José now has an enormous Tyrannosaurus Rex that blinks, bares its teeth, and roars.

“Mundosaurio” is the latest exhibit to debut at the converted penitentiary, and after the arrival of the animatronic thunder lizards, the Children’s Museum is assured a steady flow of giddy youngsters for 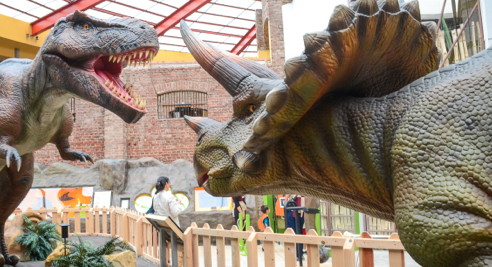 years to come. Costing ¢80 million ($150,000), the new dinosaur hall boasts one T. rex, one Stegosaurus, and one Triceratops, and because of their robotic skeletons, they actually seem to come to life.

“Thanks to scientific advances, children and the general public can access electronics and applications that allow them to explore the world,” said Cristina Briceño, head of the Department of Museology, in a printed statement. “In the museum we are using these resources in an entertaining and educational manner, to have an impact on our exhibits’ visitors in a positive way.”

The dinosaurs are full-sized facsimiles of their Jurassic ancestors, and their pebbled skins are painted in the colors that paleontologists guess real dinosaurs displayed. While guests are not allowed to touch the dinosaurs – a ring of picket fence surrounds each one – children can ogle the giant creatures as they swivel their heads and flex their reptilian tails. In the middle of the room, the T. rex and Triceratops look like they’re sizing each other up and preparing for combat.


Tyrannosaurus Rex and Triceratops. Alberto Font/The Tico Times
The exhibit is also extremely hands-on: There are 15 interactive devices, plus a number of skeletal replicas, spread out among 333 square meters. The exhibit takes its name from the Spanish words for dinosaur (“dinosaurio”) and “world” (“mundo”).

Ever since its opening in 1994, the Costa Rican Center of Science and Culture has transformed the former prison into a mecca for school field trips. The compound houses the Children’s Museum, the National Gallery, and the National Auditorium. “Mundosaurio” embellishes the Children’s Museum’s many scientific exhibits, including displays on geology, astronomy, and human biology. Smaller dinosaurs are also scattered throughout the museum’s other rooms, including several specimens in the food court and a pterodactyl in a corridor.

If the kids aren’t already begging you to take them, there’s also this: The “Jurassic Route” is a labyrinth and obstacle course that snakes through the museum. The route includes a “Tarzan swing,” suspension bridge, and a pendulum. With any luck, the offspring will sleep the entire drive home.

© 2014 all rights reserved
Posted by Unknown