I Found this article interesting because the movie was awesome and hilarious. 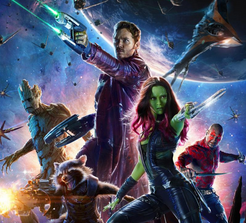 Walt Disney and Marvel’s Guardians of the Galaxy started its opening weekend with a bang, earning $37.8 million on its opening Friday. Now that includes $11.2m worth of Thursday previews, giving the film a still superb $26.6m during normal Friday business hours. The previous record for an August opening weekend was The Bourne Ultimatum with $69m back in August 2007. James Gunn’s space opera might cross on its second day of release. The film earned 29% of its Friday money on Thursday, which is just a slightly higher percentage than the 28% earned by Iron Man 3 and Captain America: The Winter Soldier. As such, it is still reasonable to presume that the film will pull in the same over/under 2.5x weekend multiplier as most Marvel films for their debut weekends. If that holds over the weekend, expect Guardians of the Galaxy to earn $91m (2.4x) to $100m (2.65x) for the weekend.

If it ends up a bit frontloaded due to the somewhat off-the-beaten-path source material, even with the word of mouth and strong reviews, it may have to “settle” for a 2.3x multiplier (The Dark Knight  – $67m Friday/$158m weekend) and a sad, shameful $88m debut weekend. However, and this is being a little speculative, it may well be the kind of film with such sterling word-of-mouth and buzz that the chatter actually affects the opening weekend. As a general rule, opening weekend is about marketing while everything after that is about quality. But there are a few exceptions to the rule, such as (offhand) Gravity and The Sixth Sense. It’s not out of the question for the much-beloved (thus far) Guardians of the Galaxy to pull something closer to a 3.0x weekend multiplier. It’s not likely, since movie-going as a whole is more front loaded, but it’s not entirely out of the question.

But more likely it will end up in the Marvel wheelhouse regarding opening weekends and wait until next weekend to cash in on goodwill. Since opening day is of course about marketing, Walt Disney deserves a gold star in that department. From the get-go, their marketing campaign as been a textbook example of how to sell an unknown property to the masses. From initial teasers that empathized with viewer ignorance with John C. Reilly playing audience surrogate and emphasizing that the characters in the film didn’t know who the Guardians of the Galaxy were either to later trailers that sold somewhat generic big-scale spectacle and revealed just a bit of the talking raccoon and talking tree, this was a dynamite marketing campaign that should be taught in advertising schools.

Of course, it helps that James Gunn and company delivered a winning final product, and so Disney screened it early and often and let the review embargo drop right before Comic-Con. And now, since the marketing campaign kept quite a few narrative and visual surprises out of the clips and trailers, it may well reap the benefit of audiences discovering their favorite beats in a theater, which is a major driving force for word-of-mouth and repeat viewings. Or not.  It may just be another big summer movie that opens with $90 million+ and then fails to hit $250m domestic. I don’t want to proclaim the film as any kind of preemptive box office champion after one day of superlative numbers.

But come what may this is a terrific start that firmly establishes that Marvel is a brand name unto itself and a more important marketing variable than whatever property it happens to be producing this time around. So yes, to answer a question I asked last April after Captain America: The Winter Soldier opened with $95 million, Marvel is presumably now Pixar. They may well have the biggest non-sequel debut in their short history, depending on if it can top the $102m debut of Iron Man. If it hits above $93m, Disney can claim both two of the biggest three debut weekends of the year (behind Paramount’s $100m debut for Transformers: Age of Extinction) with those weekends falling outside of the stereotypical blockbuster season.